Where To Go Next: This New Resort Opening In Okinawa

Halekulani has been the star of the Honolulu hotel scene for over 100 years, a place of serenity and gentle elegance within the steadily increasing hubbub of Waikiki. It’s expanding that position by taking over the Waikiki Parc hotel across the street, renovating it in the hotel’s style, renaming it Halepuna Waikiki by Halekulani and opening it in October. But in the meantime, it’s heading across the Pacific, opening its first international hotel Halekulani Okinawa in July. 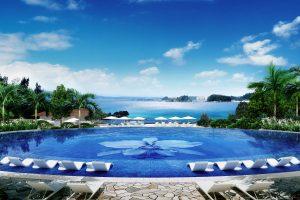 Why Okinawa? Apparently for the rich mix of culture and a quintessential turquoise water/white beach tropical setting that is harmonious with the Hawaiian mothership. Japan’s southernmost prefecture, a two-three hour flight from Tokyo, Hong Kong and Seoul,  is a string of islands, a former independent kingdom that only came under Japanese rule in the 19th century and for centuries was also under the influence of China. History buffs will automatically link it with the climactic battle of World World II. (And the U.S. military still has a presence there; the island was under U.S. control from the end of the war until 1972.) UNESCO designated ruins of castles and fortresses add to the cultural heft. 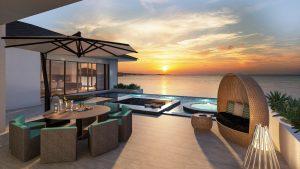 The view from the Orchid Suite at Halekulani OkinawaCOURTESY OF HALEKULANI

The setting, though, is key: the resort table is set on a mile long stretch of coastline on Okinawa’s main island within the Okinawa Kaigan Quasi-National Park giving it a varied environment--lush forest as well as white beaches bordering an extensive coral reef. Part of the natural environment is a hot spring on property feeding a pool at the spa. Additional indoor and outdoor pools for swimming include one with 1.5 million mosaic tiles in the shape of an orchid, matching the trademark pool at the hotel in Waikiki.

Previous: CXD Will Participate In The 33rd Thailand Architects Expo
Next: What Are The Characteristics Of Hotel Furniture?